This week Friends of Aomori interviewed Ryota Nakagawa, an exchange student at the University of Maine from Hirosaki University. Read Below for an interesting take on life in Maine!

1) Tell us about yourself!
My name is Ryota Nakagawa. I’m from Japan. My major is English Education. I was born in a rural area of the north part of Japan where there is tons of snow in the winter. However, the places of my university and Maine are also covered with snow in winter as well. Therefore, I’ve been living in severe cold place for all my life so far. That why I hate snow. A bunch of the time, before I enter a university, I spent practicing baseball, not studying at all. Through these experiences, I could understand how interesting baseball is and how difficult and troublesome studying are.

2) What motivated you to study abroad?
The reason why I decided to study abroad is that I wanted to experience authentic American culture and English before I become an English teacher. I thought if I could teach these things though my experiences to students, they would become interested in my class. All of things I’ve undergone here were quite new things for me. For instance, how to order food in a restaurant, how to contract an apartment and how to quarrel with my roommate in English! It isn’t a secret that I sometimes struggle with the difference of culture and the difficulty of English, but I don’t let it bother me though. My dream that I want to be an English teacher also motivates me a lot.

3) What’s the best experience that you’ve had so far in your host country?
I made use of summer vacation, and I traveled all around The United Sates with my friend by train. We traveled from east to west. I would say that that was my best experience here so far. No wonder America is called Melting Pot, there were various kind of people in various places. In addition, each place has a different culture, which we Japanese definitely could not experience in Japan. Japan is kind of a small country in terms of race. But because we are just students, we so wanted to save money that we underwent some troubles during the travel. For instance, we could not take showers for 10 days and we could not book a hotel! But all of things were my good memory.

4) What were some of your expectation how were your expectations different than reality?
I expected, before I came America, that I could communicate with anyone in English and understand their English well. However, that fact was totally different. I could not even order a cheeseburger in McDonald’s! I felt shocked, but I realized how important correct pronunciation and speaking loudly were because of the experience. The classes which I took in Japan did not focus on these points. If I become an English teacher, I’m going to teach pronunciations to students through experience!

5) What are some of the biggest cultural differences that you’ve experienced so far?
When I walked to the university, a guy said hello and smiled at me somehow. I thought that the guy was a strange person and I did not want to meet him again at the time. However, I realized one thing as time goes by. That is almost all of Americans say hello to me, although we have never met. This is the biggest cultural difference. If I do that in Japan, I mean if I say hello with simile to a young kid, I’m likely to have the police called on me.

6) Have you eaten a lobster yet? How do you feel Maine seafood?
I have eaten lobster once or twice so far. It was really expensive but very tasty. It was so delicious that I thought I wanted to eat lobster every day. But if I do that, I could not go back to Japan because that costs a lot. 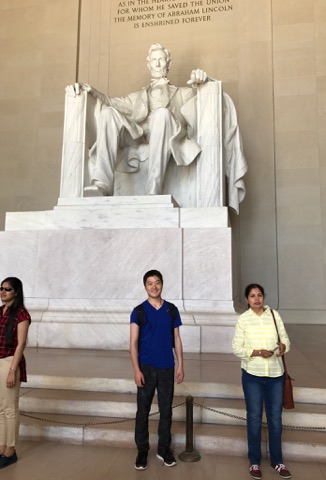